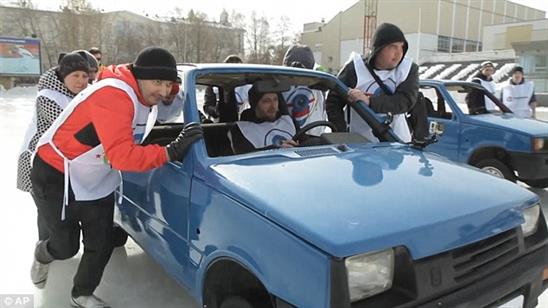 Competition with the famous football game in Scotland, recently in Russia appeared a new sport, meaning and quite interesting. It has received positive feedback from the people. And this sport named Car Curling.

The video captures the bustling, exciting image in a unique sports competition that attracts many participating teams as well as the attention of people in the city of Ekaterinburg, Russia.

The rules of this sport are quite simple. Teams only have the task of pushing their small Oka car to the specified target marked on the tape.

Each team consists of 10 people, in which 1 person sits on the car driving the steering wheel and 9 other teammates push the car together. Each team has 3 cars and a total of 9 pushes.

This discipline does not cause any danger to the players because the cars are quite light because they have been removed all engines and fuel tanks.

The car of the team closest to the target wins each round. The winning team won 1 check worth 100,000 Russian rubles.

A contestant shared that when watching a car push game on the screen it looks boring, but if you take part in the new competition, you can feel the fun of this sport.

Although this is the first time to organize this sport competition, it received many positive feedbacks from the people. Athletes who have just been raised have a lot of laughter after the bumps, interesting clashes.

The idea of ​​this particular sport was implemented after many car accidents happened in birch country. The organizers wish to create a healthy tournament to help people relax and become more aware when participating in traffic.

At the same time, the organizers hope this special sport will spread worldwide in the near future.