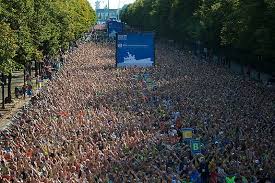 11 world records for marathon time are set on the oldest and most prestigious race track in the world.

Mrs. Christa Vahlensieck, West Germany, broke the world records with a time of 2 hours 34 minutes 47 seconds. At this point, male athletes began to explore new opportunities offered by marathons, paving the way for the sport to be included in the 1984 Olympic Games. Vahlensieck was led by Dr. Ernst Van Aaken, an advocate of interest health from sport and women’s endurance.

Vahlensieck set a world record in 1975 and was surpassed by American athlete Jacqueline Hansen in the same year. She regained the throne, surpassing the achievements of French runner Chantal Langlace in May 1977, to encourage Van Aaken, then lost two legs in a traffic accident.

Ronaldo da Costa, a Brazilian national, the youngest of a poor family of 11, rarely competes abroad. At the 1996 Atlanta Olympics, he ranked 16th in the men’s 10,000-meter event. When he first came to Berlin in 1997, he ranked fifth with a running time of 2 hours 9 minutes and 7 seconds. A year later, da Costa improved, set and kept a record of 2 hours 6 minutes 5 seconds during 10 years.

Da Costa is the only South American athlete to set a world marathon record. He is considered the national hero of Brazil.

The world began looking for the first female runner to cross the 2 hour and 20 minute mark after Joan Benoit Samuelson, US citizen, brought the world record to 2 hours 22 minutes 43 seconds in Boston in 1983. African athletes when neither could this barrier, including Fatuma Roba (Ethiopian, the first African female athlete to win the Olympic Games in 1996) or Tegla Loroupe (Kenyan national, the first African female athlete to win). a big city marathon – New York City Marathon – 1994).

Organizers of the Berlin Marathon want the 2 hour and 20 minute landmark to be conquered in the city itself. Loroupe almost succeeded in 1999 with a record of 2 hours 20 minutes 43 seconds. After nearly 20 years, the 2 hour and 20 minute mark began to look like a wall of a mile (more than 1,600 meters) in 4 minutes before being overcome by British athlete Roger Bannister.

The Berlin Marathon then invited Naoko Takahashi, the 2000 Japanese Sydney Olympic champion, to join. Takahashi sprung up in the streets of Berlin and earned a reputation for himself with 2 hours 19 minutes 46 seconds achievement. This result is not just a breakthrough in sports. Takahashi became the national heroine of Japan, which has a patriarchal culture, even included in many comic books.

Berlin has gradually become the ideal choice for athletes to overcome the next hurdles. Kenyan Paul Tergat was the first male runner to finish the marathon in 2 hours 4 minutes 55 seconds in 2003, surpassing the 2 hours 5 minutes mark. The 2-hour-4-hour mark was conquered by Haile Gebrselassie, an Ethiopian, in 2008 with a record of 2 hours 3 minutes 59 seconds.

In 2014, Dennis Kimetto, a Kenyan, surpassed 2 hours 3 minutes with a record of 2 hours 2 minutes 57 seconds. In Berlin, destination photos now include a timer.

In September 2018, Kipchoge had an almost perfect race, running alone from the middle of the race. When the last driver left the track, the athlete maintained an average speed of 4 minutes 38 seconds/mile (about 2 minutes 50 seconds/km). In the last 1.36 miles (over 2 kilometers), Kipchoge ran at 4 minutes 30 seconds/mile (about 2 minutes 48 seconds/km), the fastest ever recorded at the end of a marathon.