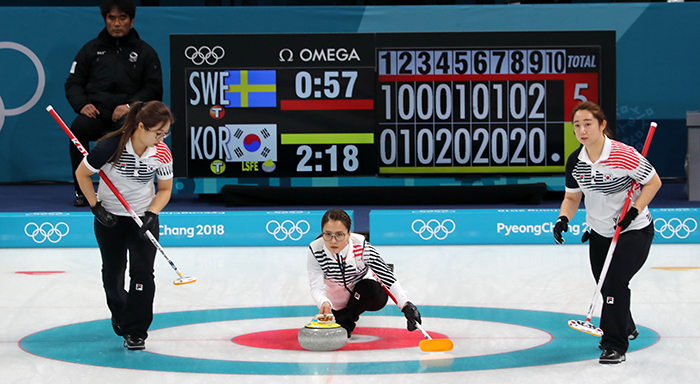 Created by Scottland people since the 16th century, first appeared at the Olympics in 1928, and officially recognized the sport of competition in 2006.

Curling has gradually developed and become one of the attractive winter sports with more than 1.5 million professional athletes around the world. Curling (a lot of fun callers are high-speed cleaning) is fevering in Korea, people will even set up a curling yard in Seoul Square today to satisfy the passion of the civilians, even though Olympic is over.

Before the Olympics began, the curling discipline was not very noticeable. But with the miracles that Team Kim (Kim’s team) shows both in and on the side of the match, Korean people are crazy about curling.

In the recent PyeongChang Olympics, Team Kim won the Silver Medal after losing to the Sweden team 8-3. Before that, Team Kim passed Canada in the quarterfinals and Japan in the semi-finals.

5 girls of the Kim family come from Uiseong district, Gyeongbuk province. Uiseong is the most famous garlic growing district in Korea, so the nicknames for these 5 girls are Garlic Girls. You may not know that the 5 members of Team Kim are all sisters and friends of the sisters, sharing the same high school in Uiseong district. All 5 people came to curling for fun, not because of the Olympic goal.

Kim Eun Jeong, the most cute and powerful glasses girl in the team (the captain) has the nickname 안경 언니 (glasses wearer) or 안경 선배 (sunbae wearing glasses, when teammates call). Team Kim’s most famous phrase is the voice command 영미 this sentence is issued with a dense frequency and accounts for 99% of the team’s voice. Team Kim often exchanges in battle with 사투리 (dialect) to hide tactics from the opponent.